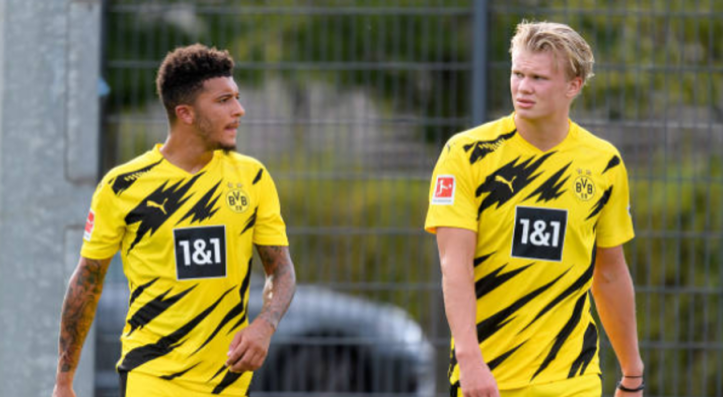 Jadon Sancho and Erling Haaland were once again on form for Borussia Dortmund despite their team faltering in a 2-2 draw with Hoffenheim and sinking further and further away from the coveted top four Bundesliga places. The result means the former German champions now sit sixth in the Bundesliga and could finish the weekend eight points off the Champions League spots if Wolfsburg beat Gladbach. But how did the Dortmund stars perform?Borussia Dortmund v Hoffenheim: Player Ratings, Match Stats, Player Stats✔️ GOOD PERFORMANCEJadon Sancho: 7.2After a poor first half of the season it now seems as though the England international is enjoying a tremendous second half, despite the indifferent form of his team. Sancho struck just 24 minutes into the game when a through ball from Raphael Guerreiro set the young forward free to curl a wonderful finish by the Hoffenheim keeper and open the scoring for his side. That now means the Manchester United transfer target has scored six goals and picked up a further five assists in his last 10 games for Dortmund. Erling Haaland: 7.6At times Haaland can look like a frustrated figure in the black and yellow of Dortmund. Either with his hands on his hips or out wide in disbelief, the towering striker often just wants a long ball over the top to run on to. For much of the game the Norwegian striker had to stand and watch as his team’s defence did their best to lose the game. Especially when he had a goal ruled out mid-way through the second half because a teammate was offisde. However, he was eventually offered a clear through ball to run on to late on in the match and he took it with relative ease. With just 10 minutes left on the clock, a floated ball over the top landed in front of the on-running striker, who comfortably pounced on it and fired the ball into the roof of the net to make it 15 goals in 16 Bundesliga games for the striker. ❌ BAD PERFORMANCEMarwin Hirtz: 5.9After a number of high-profile mistakes from first-choice goalkeeper Roman Burki, Edin Terzic turned to back-up keeper Marwin Hirtz to see if the experienced player could make a difference between the posts. Unfortunately, in recent games, Hirtz has proved to be just as error prone. Saturday’s clash was no different, when just six minutes into the second half a low free-kick was swung into the Dortmund six-yard box and the shot-stopper was nowhere to be seen. Instead, Ihlas Bebou approached the cross entirely unmarked, until a late lunge from Hirtz connected with the cross, only to see his punch hit off the head of the Hoffenheim striker and go into the back of the net. Borussia Dortmund v Hoffenheim: Player Ratings, Match Stats, Player Stats